This cosmetic concern is caused by excess fat in the submental area, which we usually refer to as submental fullness. The double chin is a common concern, as most people are not unsatisfied with their streamlined profile. According to the American Society for Dermatologic Surgery, 68% of the general population between 25-50 wished to have a slimmer chin and neck. The double chin appearance is a cosmetic but not a medical concern and can result from weight facilitation and airway positioning.

such as liposuction, face and neck lift

This includes coolsculpting with the mini applicator, Lipodissolving injections such as Kybela and Belkyra, and skin-tightening lasers such as Fotona.

What is Belkyra or Kybela

One recent development in anti-aging science is deoxycholic acid, an injectable treatment for a double chin.

“Deoxycholic acid is a substance the gallbladder uses to dissolve dietary fat,” says Ishii. “Injecting this chemical into the skin beneath the chin melts fat there that the body then reabsorbs.”

This non-surgical approach requires several treatments spaced out over several weeks. Most people receive two or three treatments, but it can take up to six treatments, depending on the patient and the amount of excess fat in the treatment area.

Benefits and Drawbacks of Deoxycholic Acid

Some clients choose to do the injection for the double chin, which is considered more invasive than laser but less than surgery. Belkyra or Kybela deoxycholic acid injections. These injections are painful, more so than traditional fillers and Botox injections. The injection may also result in itchiness and swelling for 2 weeks after each session. This material is secreted in our digestive system to dissolve dietary fats. It has been purified and studied for its fat-dissolving features in the cosmetic field, especially in double chin correction.

Man in his late 50s with the concern of sagging skin in the submental area. After discussing his case and medical history, we suggested the tight-framing Fotona laser. The Fotona uses the ND-Yag Laser in piano mode, which allows deeper penetration. The target is to heat the skin surface to 42 degrees and keep the temperature for 20 min. It takes 3-4 sessions to achieve significant improvement. 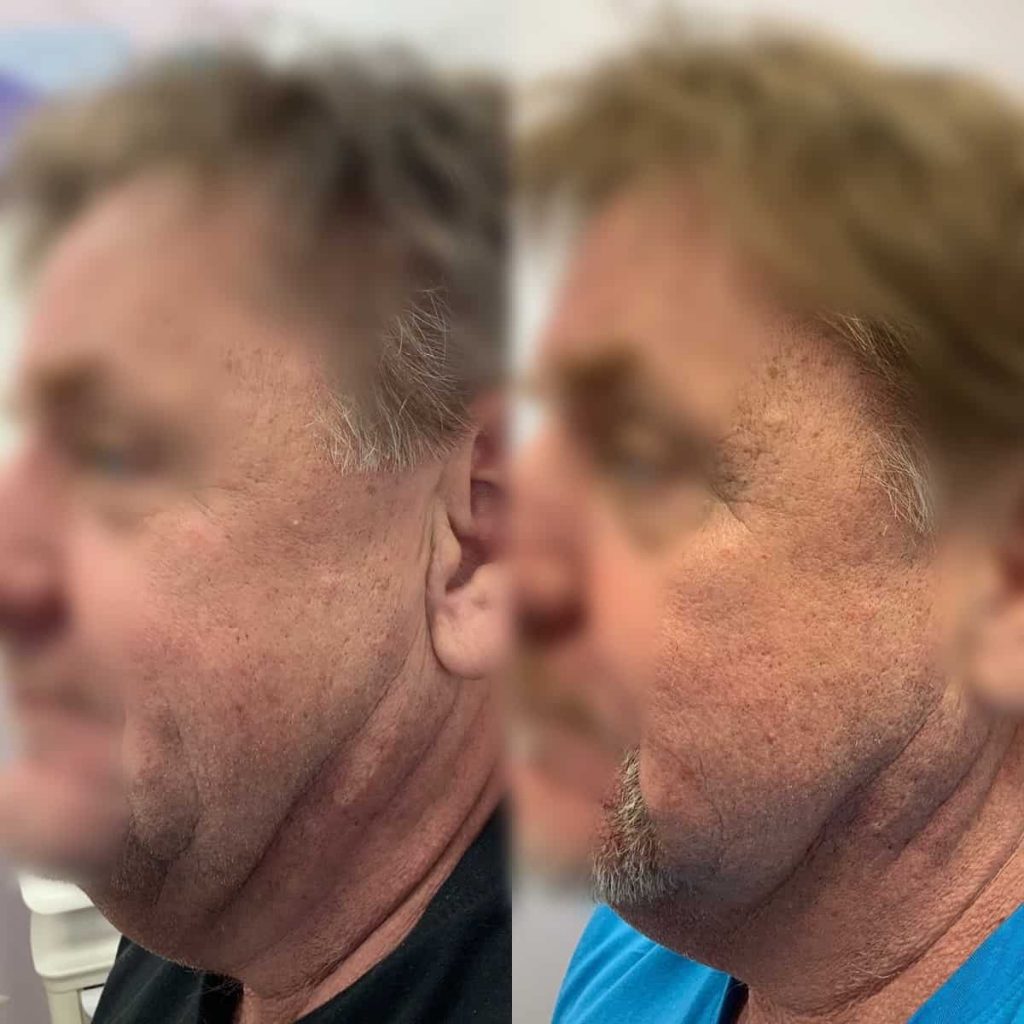 How does the tight sculpting laser work?

Nd: YAG piano mode has a super long pulse mode, in 100s of milliseconds. This feature allows the laser heat energy to penetrate the subcutaneous level and stimulate fat cells’ metabolism without hurting the epidermis layer. The PIANO® mode can extend the pulse length from a millisecond to a second, resulting in a significant slimming effect.

The second stage of the same session consists of the Er: YAG SMOOTH® mode, which is not ablative and ideal for skin tightening. The laser initiates neocollagenesis through intense but superficial heat delivery. This laser aims to improve laxity and elasticity in the treatment areas.

You can read more about the technology of the Fotona tightsculpting laser in correcting the cosmetic concerns of double chin here.

What does the double chin treatment with Fotona laser look like?

As per the youtube video, the treatment is painless using the S11 scanner and the matrix view heat sensor; we adust the laser setting to accommodate for both effectiveness and patient conform.

R.N. Dima Omran, Dr. Kamal Alhallak, Ph.D. in Pharmacy, Darian Holtby Certified Laser Tech. Our team is the only laser clinic in Canada with full accessories for the Fotona tight sculpting. We have the  MatrixView® temperature monitor to ensure the correct and priced thermal energy is delivered. The scanner-supported TightSculpting® S11-T scanner and the MatrixView® can have large areas such as the abdomen and jawlines.

This case study is based on the personal experience of one patient and is not intended to represent typical results. Individual results may vary, and the treatment results depicted in this case study are not guaranteed. The information provided in this case study is not a substitute for a consultation with a licensed healthcare provider, and it is important to understand that results vary from person to person. Before undergoing any cosmetic treatment, it is important to speak with a licensed healthcare provider to understand the potential risks, benefits, and results.

Call Us Now
Text Us Now
Email Us Now